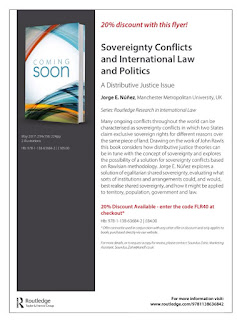 The starting point of the project is, unsurprisingly, the concept of ‘sovereignty’. However, this concept presents a problem: that sovereignty is often seen as absolute, unlimited and hence not shareable. This Chapter intends to demonstrate that there is no such a thing as absolute sovereignty—i.e. that limited sovereignty is the norm, though the nature of the limitations varies. Ergo, if sovereignty can be limited then whatever it entails might be shared.
Given the importance of the idea of sovereignty to the subject and argument of the monograph, this Chapter will need to give (i) a full and rigorous analysis of the concept of ‘sovereignty’ and, in doing so, (ii) consider leading accounts of the notion. It is worth noting at this point that the concept of ‘sovereignty’ is not crucial per se for this monograph except in that it has limitations. Therefore, in order to give a full analysis of sovereignty and to show that it is always limited—hence shareable—the former (i) will be done with a conceptual analysis; the latter (ii), through identifying specific theorists or bodies of literature that take sovereignty to be absolute and a brief overview of a few major thinkers who consider sovereignty to be limited.
More preview posts coming in 2017.
Routledge PREORDER