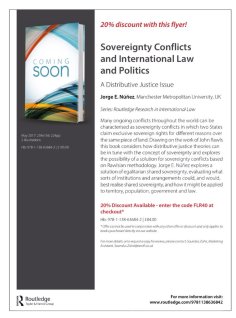 About the Book
BOOK PREVIEW: Chapter One: Introduction.

To evaluate the potential for using principles of distributive
justice to resolve certain kinds of sovereignty conflicts,
the monograph is divided into three Parts.

The First Part—i.e. Chapters One and Two—includes
discussion on two preliminary potential pitfalls to this project
that is the use of Rawlsian methodology and the use of the
concept of ‘sovereignty’. Chapter One, the Introduction,
presents some simplifying assumptions and the
basic elements that constitute this study and in
particular goes through the critical discussion on
Rawls methodology in order to justify its application.
Chapter Two will address a key task in developing the
new approach: to examine if the concept of
‘sovereignty’, which is assumed by many to be absolute,
can be (and in fact, actually is) limited. This Chapter
follows two lines of analysis: a) conceptual; and b) historical.

The Second Part—i.e. Chapters Three, Four, and Five—
introduces and explores the current state of affairs in
international law and politics in terms of conceptual elements
and potential remedies to sovereignty conflicts.
Chapter Three will focus on assessing the need for a revised
‘shared sovereignty’ and will review different ways in which
this concept (in various versions or conceptions) and similar
ones have been previously applied in legal and political
scholarly literature.
Chapter Four will examine self-ownership as a way to define
sovereignty. More precisely, if it can be established that
sovereignty may in theory be limited and the need of a
revised ‘shared sovereignty’ the next step will be to evaluate
how sovereignty can be shared—i.e. how a State can limit
itself by sharing its rights and obligations and still remain
sovereign.
Chapter Five highlights the main remedies applied at
international level to sovereignty conflicts and will explore
each in order to determine whether any of them could be a
reasonable solution to the sovereignty conflicts discussed.
What this Chapter will argue is that there is a need for a
reasonable solution that the reviewed international remedies
cannot offer.

The Third Part—i.e. Chapters Six, Seven, and Eight—will
explore the use of Rawlsian methodology in order to put a
solution to certain sovereign conflicts, and discuss if the
outcome is a reasonable remedy for them.
Chapter Six will introduce and explore: a) the conditions for
achieving justice—toleration, peace, etc.; b) why the ‘just
acquisition’ principle may not work; and c) why the Rawlsian
method of conceiving of the respective claimants as behind a
‘veil of ignorance’ just might.
Chapter Seven will test the proposed model by working out
what sorts of institutions and arrangements could, and would
best, realise it. In order to do that this Chapter will make use
of some sovereign conflicts to show that the model can be
extended from the general principles to workable institutions
that realise those principles in: a) population; b) territory; c)
government and law; and d) all that they imply (e.g.
defence, natural resources, financial system).
Finally, Chapter Eight will conclude by assessing the model’s
potential and highlighting any possible limitations and
implications.
More preview posts coming in January 2017.
Routledge PREORDER