Juris North so far and Call for Presenters 2015-16 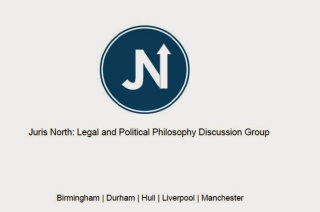 Juris North, a legal and political philosophy discussion group, in collaboration with the Universities of Birmingham, Durham, Hull, Liverpool, Manchester, and Manchester Metropolitan.
As part of our activities, we have had some discussion sessions this term:
The first session with Dr Iain Brassington, the University of Manchester started with his striking question: “allowing at least some cannibalism, would that be so bad a thing?” Indeed, he made clear that “strictly speaking, cannibalism is not currently forbidden by any statute in English law.  A certain kind of cannibalism has even had an outing on mainstream television: in February 1998, Channel 4 broadcast an episode of a programme called TV Dinners […] that featured a couple preparing placenta pâté to serve at a party to celebrate their child’s birth.”
The second session with Dr Jorge Núñez, Manchester Metropolitan University on how to solve sovereignty conflicts such as Ukraine, Falklands and Gibraltar. “The Egalitarian Shared Sovereignty” is the solution for the Crimea case, Núñez proposes, as well as any other sovereignty conflict in which several sovereign States are claiming exclusive and absolute sovereignty over a third populated territory.
The third one with Dr James Pattison, an expert on the ethics of war from The University of Manchester, leading a debate on the ethical issues surrounding the arming of rebels in territories like the Ukraine and Syria.  Professor Pattison said: “Despite its frequency and political importance there has been very little engagement with the ethical issues surrounding the arming of rebels. My new research aims to bridge this gap.” A Press Release about it:
http://www.manchester.ac.uk/discover/news/article/?id=14171
The audience: GDL, LLB FT and PT students, PhD students, from both UoM and MMU, staff from Liverpool, LSE, Manchester, and MMU, representatives of the Syrian community, and public in general. According to them:
“A very engaging and comfortable environment where people can come share their thoughts! Looking forward to discussions in the next semester.”
“This initiative is a very welcome development and will surely be appreciated by the cohort of students looking for more stretching intellectual development opportunities.”
And more discussions to come in Semester One 2015-16 between October and November. Until then!
Call for Presenters 2015-16
If your current research is on a topic that can be broadly characterised as jurisprudence—i.e. legal and political philosophy, and you would be interested in presenting it to a friendly group, which includes academics as well as lawyers, you are welcome to be a presenter at the Juris North Discussion Group.
The discussions are normally held on Wednesday afternoons. But we can be flexible about the particular days that we meet. Discussions are always informal and very lively since we follow a Rawlsian approach. That means we do not have “Professors” and “Students” but people interested in discussing issues related to legal and political philosophy. So any question is an important question for debate.
If you would like to give a paper as part of our 2015-16 Working Paper Series then please send an abstract, no more than 500 words long and written in English. If you are interested, please contact Dr Jorge Emilio Nunez j.nunez@mmu.ac.uk.
The seminars will have a ‘pre-read’ format: successful applicants will be asked to send a draft paper two weeks in advance of the seminar so that it can be circulated amongst members of the group.
Accommodation and expenses: we will not be able to make any contribution towards accommodation and travel expenses.
Enquiries please contact Dr Jorge Núñez: j.nunez@mmu.ac.uk