The Juris North Group invites you to attend to the discussion on the following paper this term:
Week Three [Wednesday 25th March 2015, at 3pm, NBS3.13] – Dr James Pattison, Professor, School of Social Sciences, The University of Manchester, “The Ethics of Arming the Rebels” 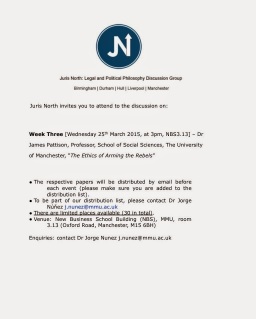 •     The respective papers will be distributed by email before each event (please make sure you are added to the distribution list).
•     To be part of our distribution list, please contact Dr Jorge Núňez j.nunez@mmu.ac.uk
•     There are limited places available (30 in total).
•     Please find complete details following the link below. RSVP
https://eventbrite.co.uk/event/16138348234/
THE ETHICS OF ARMING THE REBELS
Dr James Pattison
Professor of Politics, University of Manchester
james.pattison@manchester.ac.uk
I. INTRODUCTION
The arming of rebel groups in states where there is severe oppression, low-level conflict, or civil war is one of the most notable ways that states attempt to realise their foreign policy goals. Notorious examples include the US arming, training, and financing of the Nicaraguan Contras against the Sandinista government (including the covert funding of the Contras without Congressional Approval in the ‘Iran-Contra Affair’); the British arming, in contravention of a UN arms embargo, of Sierra Leone through Sandline, a UK-based private military and security company (PMSC) (the ‘Arms-to-Africa Affair’); US arms to the mujahedeen in Afghanistan during the Soviet occupation; and Russian supplying of arms to various pro-Russian separatist rebel groups in former Soviet states (e.g. Ukraine). There have also been numerous cases of the arming of rebels in potentially more morally justifiable cases. These include the supply of arms by the US and Islamic groups to the Bosnian Muslims during the break-up of the former Yugoslavia and Soviet and Cuban military support for anti-apartheid forces in South Africa.
The arming of rebel groups was been particularly patent during the Arab Spring. After the uprising in Libya in 2011, various states provided lethal and nonlethal arms to the forces opposed to Gaddafi’s regime. This included material and financial support from the Libya Contact Group, as well as arms from France, Qatar, and the UK. In Syria, the arming of the various parties by external actors became one of the central dynamics of the conflict. It was reported that, on the one hand, Qatar and Saudi Arabia (and others) supplied arms to the Free Syrian Army (FSA), the UK and France provided it with ‘nonlethal support’, and the US and Turkey facilitated and coordinated the supply. On the other hand, Russia and Iran supplied weapons such as missile systems, mortars, and rockets to the Assad regime. In 2012, the UK even secretly drew up plans to train and equip a 100,000-strong Syrian rebel army abroad, which would then strike at Assad in a manner similar to the ‘Awe’ and ‘Shock’ strikes on Iraq in 2003. And, in September 2014, the US Congress approved President Obama’s plan to train and to equip ‘moderate’ Syrian rebel groups.
Despite the centrality of the arming of rebels as a foreign policy option, there is very little, if any, detailed engagement with the ethical issues surrounding this option. There is a growing literature on the ethical issues surrounding civil wars and, more specifically, the conditions for engaging in just rebellion. The focus of this literature, however, is largely on the question of the justifiability of the rebels engaging in civil war and their conduct when doing so, rather than the permissibility of the arming of rebel groups by other agents. There is also a huge literature on the ethics of humanitarian intervention. Within this literature, an often-cited just cause is intervening in support of rebels who are fighting against an oppressive state. However, the arming of rebel groups is only briefly noted as a potential, additional option in this literature, rather than being subject to detailed analysis. Instead, the literature largely focuses on the problems that come with sending troops and/or planes in such cases, such as the worries about collaterally harming civilians with bombing raids.
This paper therefore considers the ethics of arming the rebels. Overall, it argues that arming the rebels should be generally eschewed, but may be occasionally morally permissible. More specifically, the paper seeks to establish that arming the rebels is (a) exceptionally morally permissible, even when the rebels are engaged in unjust wars, but (b) generally impermissible. The former, far more permissive claim will be established in the first part of the paper. The latter, more restrictive claim will be established in the second part of the paper. Here I will also consider what the international law on arming rebels should be. The conclusion will consider the relation between these two claims and its import for Just War Theory (JWT).