Sovereignty Conflicts as a Distributive Justice Issue
Dr Jorge Emilio Nunez
Abstract Most—if not all—conflicts in international relations have—to an extent—something to do with sovereignty. On the theoretical side, we learn at University that either considered as a strong concept or one that has lost relevance, it is still discussed. On the practical side, the prerogatives a State has over its people and territory appear to be the highest. Within these ideal and real backgrounds, there are various sovereignty disputes around the world that struggle between legal and political limbo, status quo and continuous tension with various negative consequences for all the involved parties (e.g. violation of human rights, war, arms trafficking, only to name a few). It is increasingly clear that the available remedies have been less than successful, and a peaceful and definitive solution is needed. This article proposes a fair and just way of dealing with certain sovereignty conflicts. The paper considers how distributive justice theories can be in tune with the concept of sovereignty and explores the possibility of a solution for sovereignty conflicts. I argue that the solution can be based on Rawlsian principles.
ATINER Law 2014
Conference Program 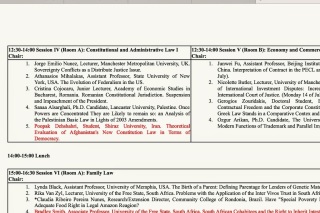